Between pictures and text messages, I have a complete play-by-play of August 5, 2017. I know that Matt went to the golf range to practice for an upcoming charity golf outing. I know that I had a slow morning with G and H, and then somehow allowed them to talk me into a trip to Target, a store H once called his most favorite place in the world. (Sorry Disney World.) I know what Matt had for lunch, what we did in the late afternoon, and where we went—or didn’t—Saturday night.

The main event of our day was a trip to Metlife Stadium to watch a Jets scrimmage. Years prior, Matt had gone with only H, but this year, we went as a family. G and H joined the other kids on blow up slides and obstacle courses. They ate food from the concession stands and collected merchandise. We sat in our seats and took pictures with the field in the background. But after about fifteen minutes of watching the scrimmage, G and I were bored. I remember walking away from our seats, holding hands with G, and agreeing that next year we’d leave this event to the boys. She asked what we’d do and I told her, snarkily, anything but football.

Unsurprisingly, we didn’t stay until the end. G and I wanted to leave. H had a meltdown over something. And we made the decision to leave shortly after halftime. Although after re-reading the text messages, it’s obvious Matt would have liked to have stayed longer. He loved football and the Jets and was on a determined mission to ensure H (and G) was a lifelong Jets fan.

That night, we had an invitation to a backyard party. Matt decided he was too tired to go—remember, last week, I wrote that Matt’s desire and energy to go out on a Saturday night vanished after our dependably fun night—but he encouraged me to go without him, since we’d already RSVP’d yes. I remember sitting at the party and feeling the wrongness of being out without Matt. In hindsight, I’d gone to the party to chase normal, but had realized that chasing normal alone doesn’t feel like chasing normal at all.

I once wrote that regret is a poison. And like a poison, regret begins localized—maybe in a single memory—but it can quickly circulate through an entire system. If it’s not expelled, regret can destroy a lifetime of memories.

When I think about regret, I don’t think about August 5, 2017. There’s another day, near the end of the story, that catches me off guard in the silence, that causes tears to burn behind my eyes at a moment’s notice. That is the day so deeply embedded in regret I sometimes can’t remember to breathe, can’t remember to find the light and love in the story. That is the day that needs to be expelled.

How to expel regret?

For that day near the end of the story, I’m not sure, yet. I’m hoping I’ll find the answer within the remaining days and months of this project.

A choice born out of hope is one I could never regret. With that thought in mind, fighting back the regret clawing for mental space in today’s post isn’t hard. The regret all but melts away when confronted with the afterglow of hope.

The afterglow of hope. It doesn’t sound like much at first glance (first read?). But our hope burned so brightly for so long that I think even the afterglow will be a force to be reckoned with. With a little tending, it might even end up being enough to chase away the gloom of all those lingering regrets. I hope so. 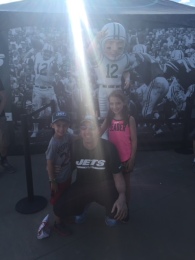